a story about same-sex wedding ceremony that I almost missed

The sun was rapidly approaching mountain range line that was surrounding the desert. I was on my way to the Temple, to meet Jessie and Taylor. We exchanged some emails about what and when, but honestly, we didn’t do our homework. I didn’t know how Jessie and Taylor looks like, we never had a chance to talk over the phone and discuss wedding ceremony details.

Nevertheless, that day in Playa, everything was going accordingly to the plan. Temple was few minutes away. I knew I am right on time. Weather looked good. Light was perfect for the wedding ceremony.

And then I’ve noticed the dust storm rapidly approaching in the horizon. And I knew right away that everything was about to get a bit more complicated.

Some people mistakenly call them sand storms. But in Black Rock desert, it’s really not a sand. It’s an alkali lake bed dust. And that alkali is no joke. And that dust storm will kick your ass if you’re not prepared. It’s usually dry and packed, but it gets ground up from the surface during heavy car, bike and foot traffic over the course of 30 days of Burning Man preparations. And so that dust is everywhere, waiting for that perfect wind to show up.

So, when the dust storm kicked in at the full power, I finally admitted there were quite a few problems I had to deal with.

First of all, I didn’t know what exact spot where wedding ceremony will happen. Second of all, I didn’t know big wedding party will be.
And then there was this third problem. My favorite one. I didn’t even know the gender of the wedding couple. Jessie and Taylor. Could be woman and man, could be to gay guys, or it could be lesbian couple. And honestly, I was hoping for the latter, as I never photographed lesbian wedding ceremony before.

And I was ready to figure that on the go, but the dust storm, with visibility limited to 15-20ft, suddenly made it all much complicated.
So, my journey in the dust storm began.

And after wondering in the dust for 45 minutes, I was ready to give up.

But then three figures, wrapped up in goggles and bandanas, stepped out of the dust wall. Right in front of me. And after exchanging words I quickly learned that they were looking for their wedding party. I was like “Who’s getting married, yo?”. And the figures covered faces were like “It’s us!”. I was like “You’re not Jessie and Taylor, are you?”.
And the covered faces said the magic words: “Yes! we are!”.

And once the face covers were down, I realized my little dream came true. I was going to be photographing my first lesbian wedding ceremony after all!

And since wedding officiant and wedding photographer were there, Jessie and Taylor decided to proceed with their same-sex marriage.

The ceremony was one of the dustier ones I ever photographed. Couple had covered faces for big portion of it, and finally took it off as the wind started dying off in the end of same-sex wedding ceremony.

Taylor and Jessie’s wedding had exactly three guests. Four actually, if you count wedding photographer. All strangers. Saul, my Amber Dust camp mate, that appeared out of nowhere (and later disappeared the same way), and a couple of random by passers. Very typical wedding crowd for Playa’s wedding ceremony.

After the wedding ceremony, we exchanged congratulations and good-bye hugs. Jessie and Taylor were ready to head back to camp and celebrate their same-sex marriage with their friends.

The dust was settling down. Weather was calm. And the night was rolling in. It was time to put some warmer clothes and get ready for night in Playa.

I am LGBTQ friendly award-winning wedding photographer based in Madison, WI. If you’re a lesbian, gay, bisexual, transgender or queer couple and are planning your LGBT wedding in Madison, WI or Black Rock City, give me a shout! It really doesn’t matter how big or how small your LGBTQ wedding will be- I would love to be part of it! Love is love!
Available to travel worldwide!

Every time I see Tom’s and Brad’s wedding ceremony pictures, I remember the fact that their same-sex wedding ceremony almost didn’t happen.
For initial consultation I’ve met them at café Zoma in early 2015. We clicked. They liked my take on documentary wedding photography and I

Every time I see Tom’s and Brad’s wedding ceremony pictures, I remember the fact that their same-sex wedding ceremony almost didn’t happen.
For initial consultation I’ve met them at café Zoma in early 2015. We clicked. They liked my take on documentary wedding photography and I liked the couple. We talked life, we talked weddings, and we talked same-sex marriage injustice. Same-sex marriage was still illegal in most of the states across the US, including the State of Wisconsin.

But same-sex marriage was legal in neighbor State of Minnesota. So Tom and Brad initially had a plan to get married there one day earlier. And bring their friends and family together for a big same-sex wedding Madison WI celebration in Madison Children’s Museum afterwards. Their same-sex wedding plans had a lot of uncertainty.

And then June 26th, 2015 came. And super fucking awesome news came out of Supreme Court: same-sex marriage became legal in all 50 states in US.
Suddenly everything felt right and Tom’s and Brads wedding day future just became 100 times brighter.

While initially October 18th wedding ceremony was planned in Minnesota, after all it happened on Madison Children’s Museum rooftop. And it happened with the bang!

Surrounded by friends and family, hundreds of smiles, beautiful Madison’s Downtown rooftop views, and gorgeous sunset was everything this gay couple dreamed about.

And as wedding photographer Madison WI, I was very proud to witness this significant moment in United States LGBT history.
See more images from Tom’s and Brad’s same-sex wedding here. 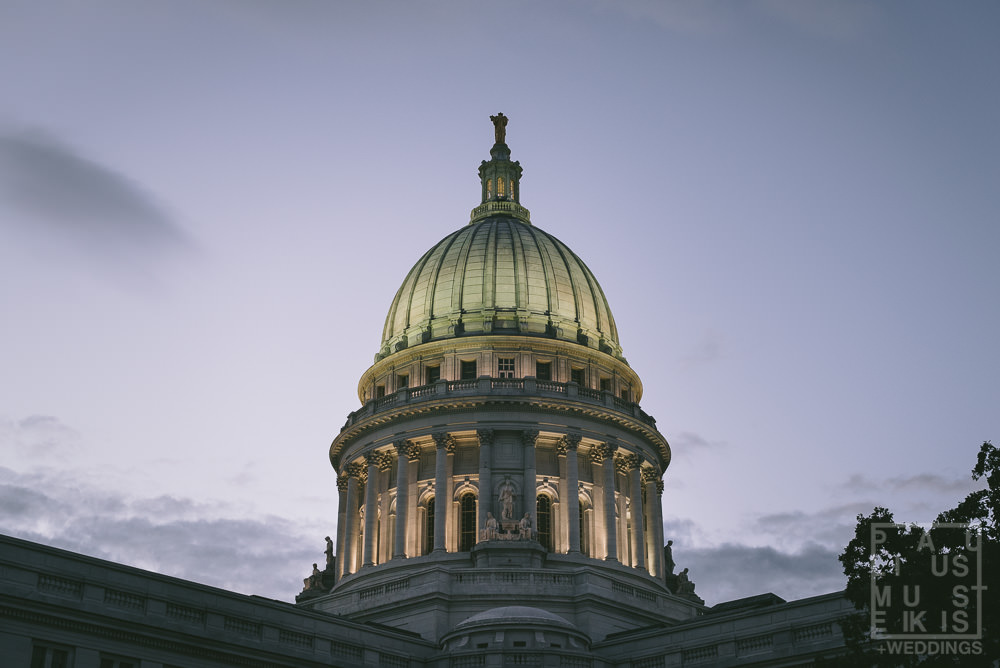 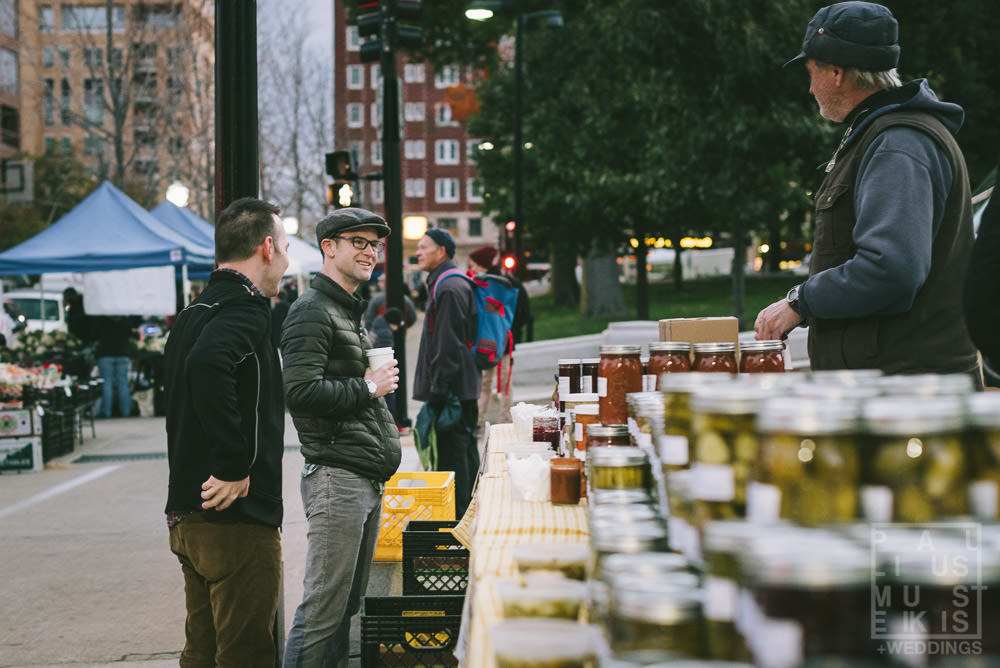 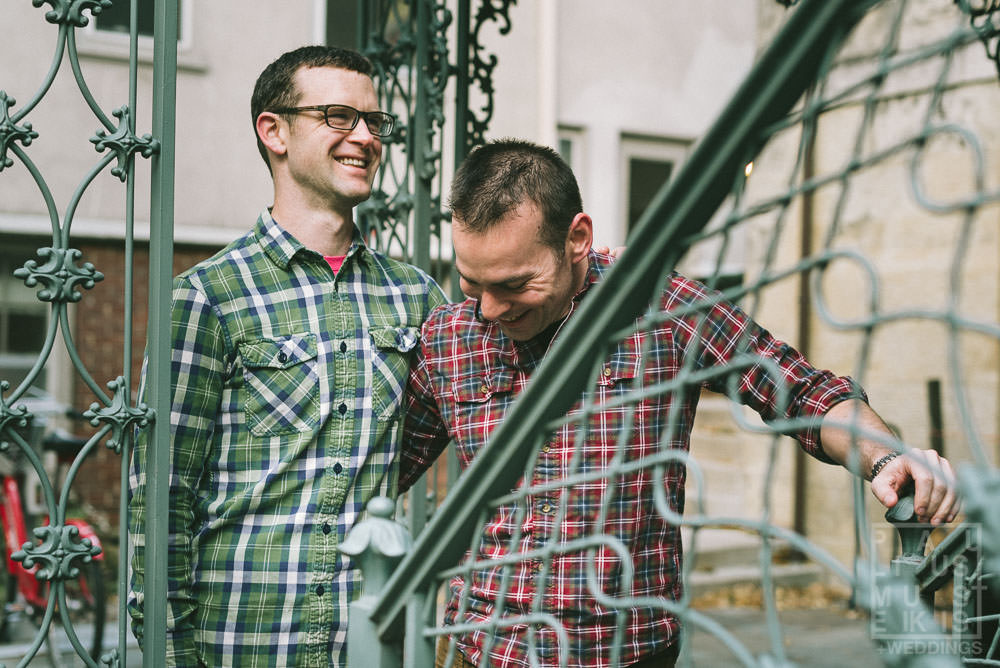 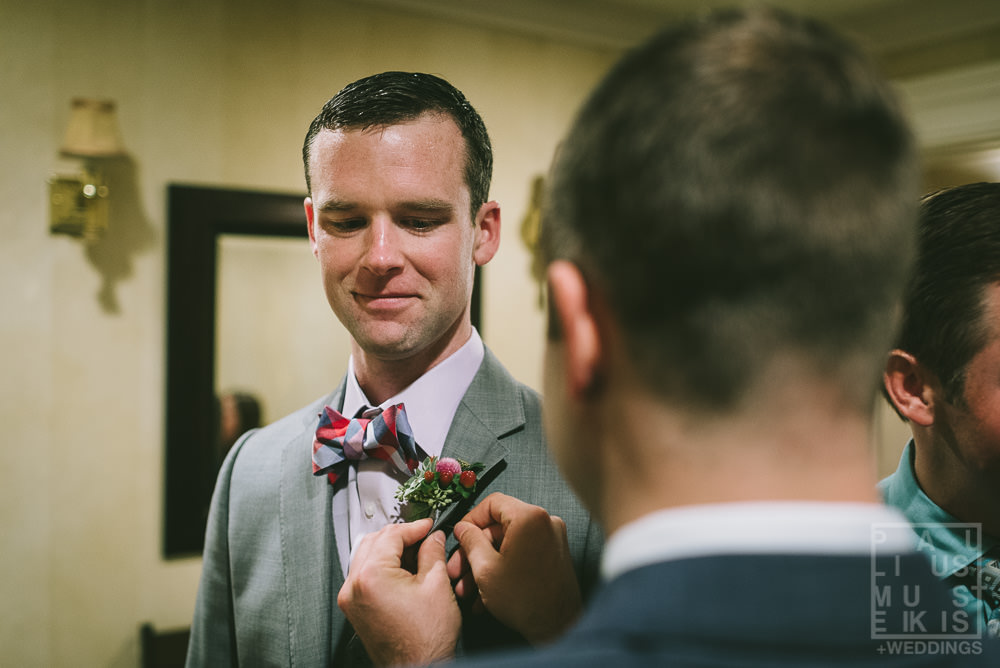 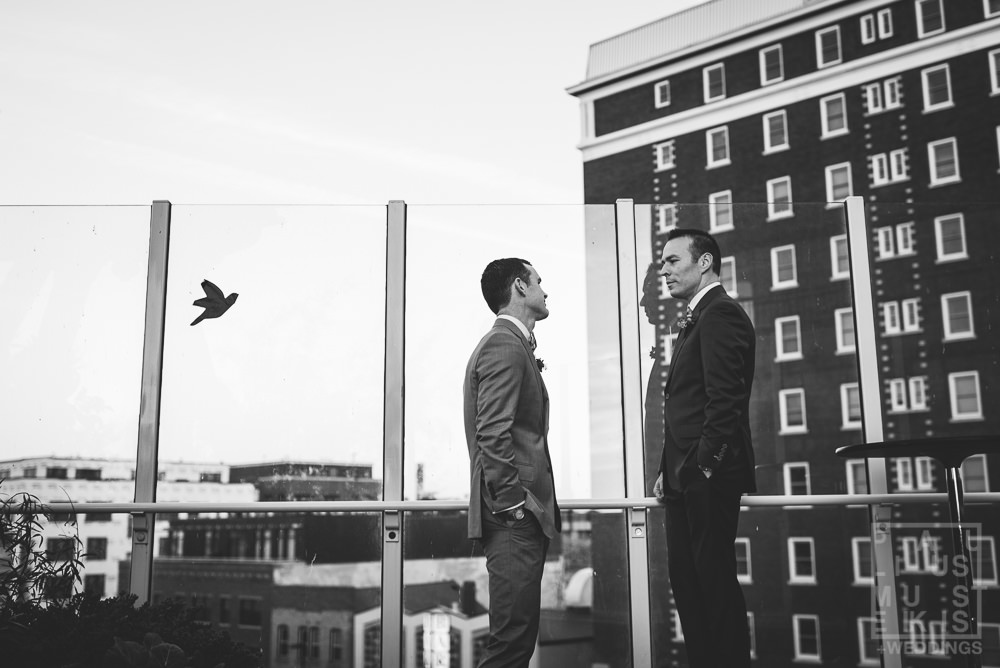 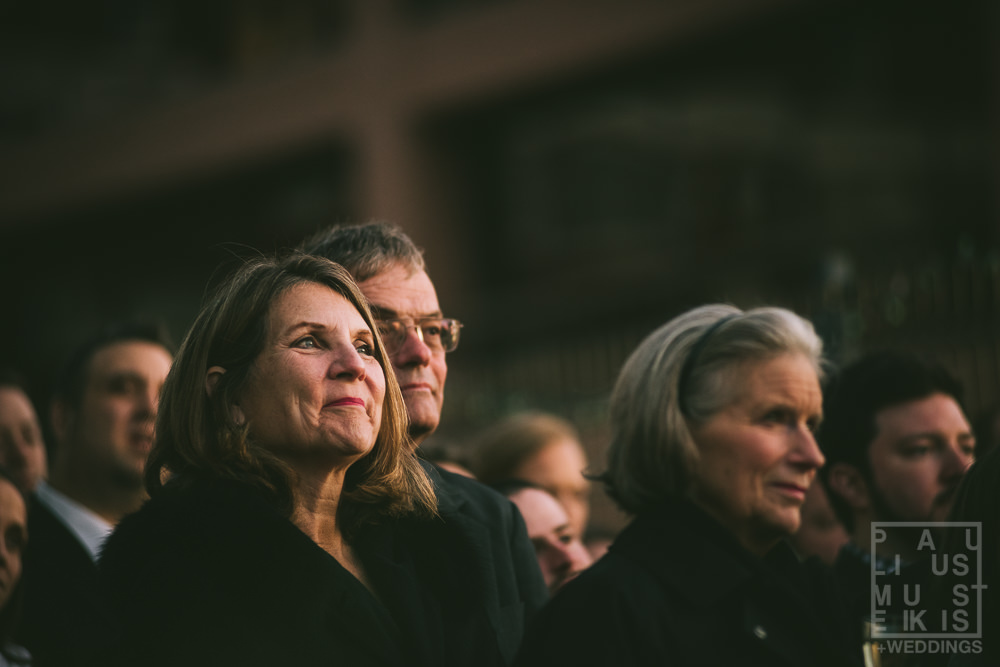 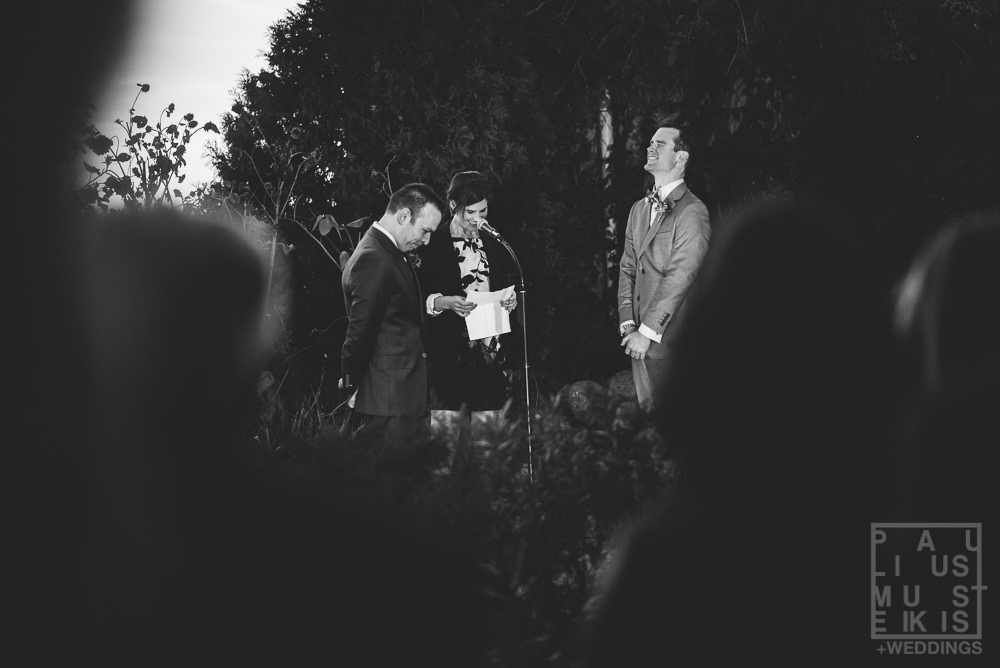 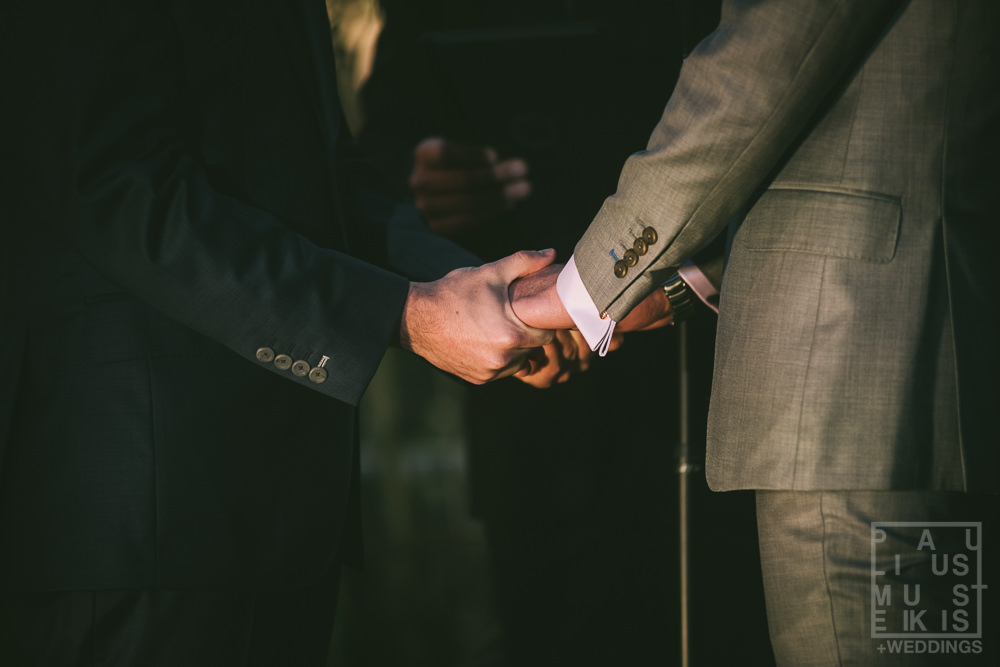 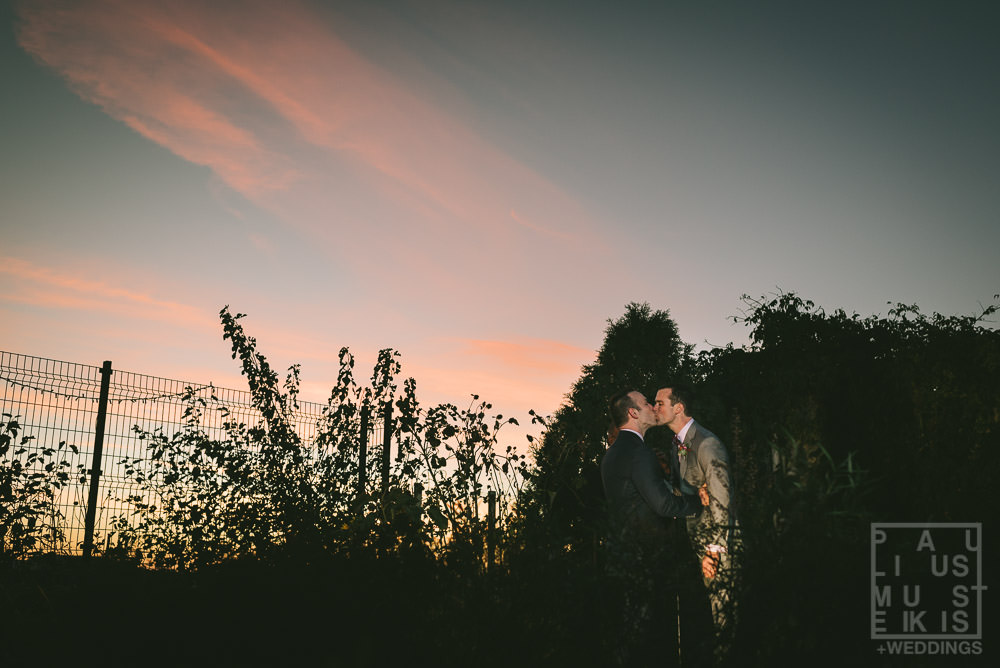 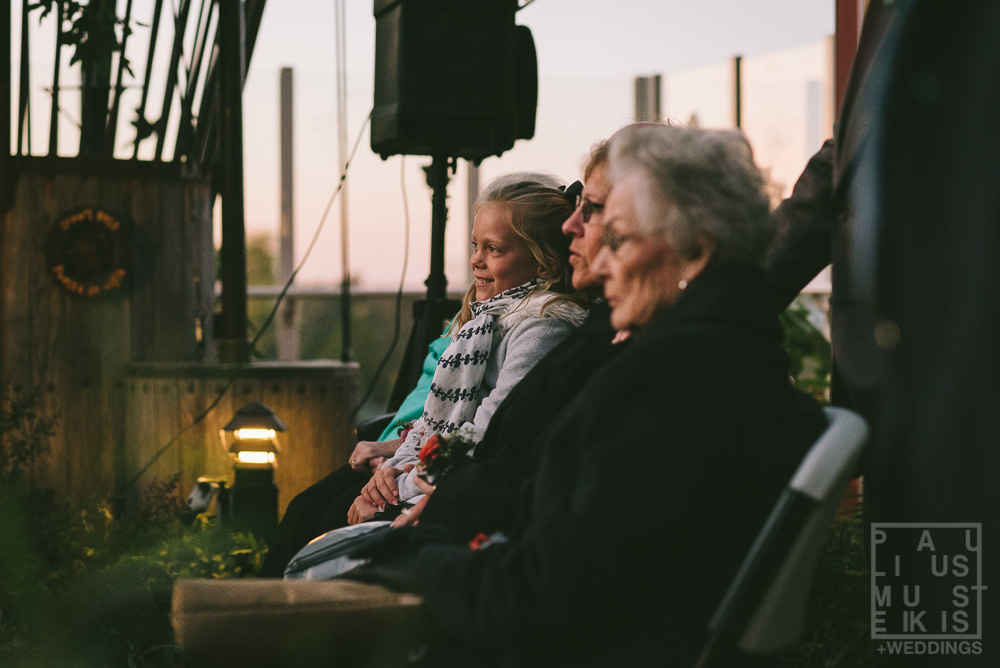 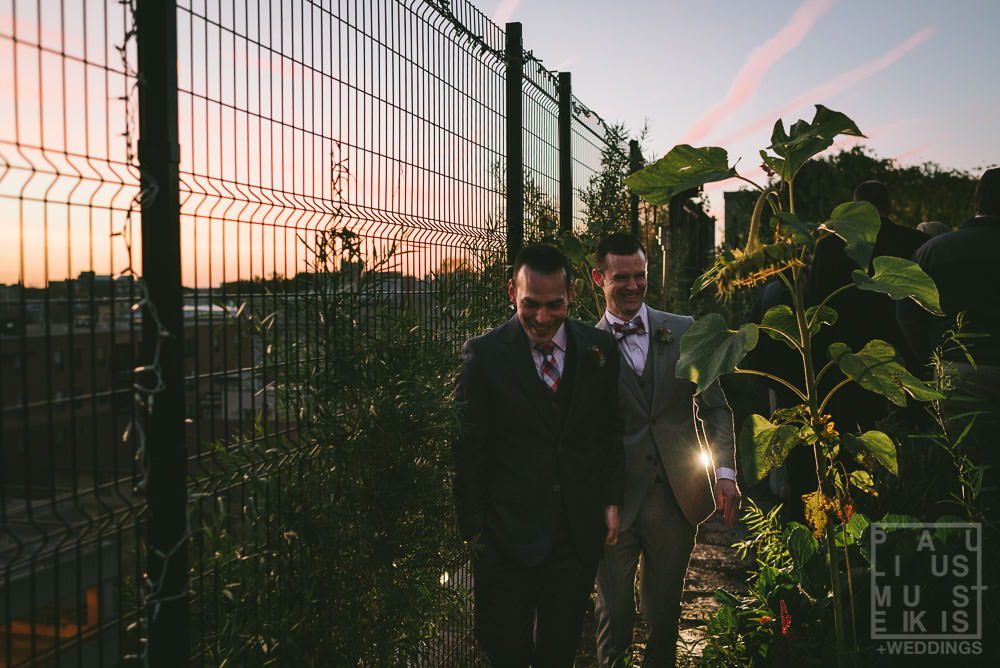 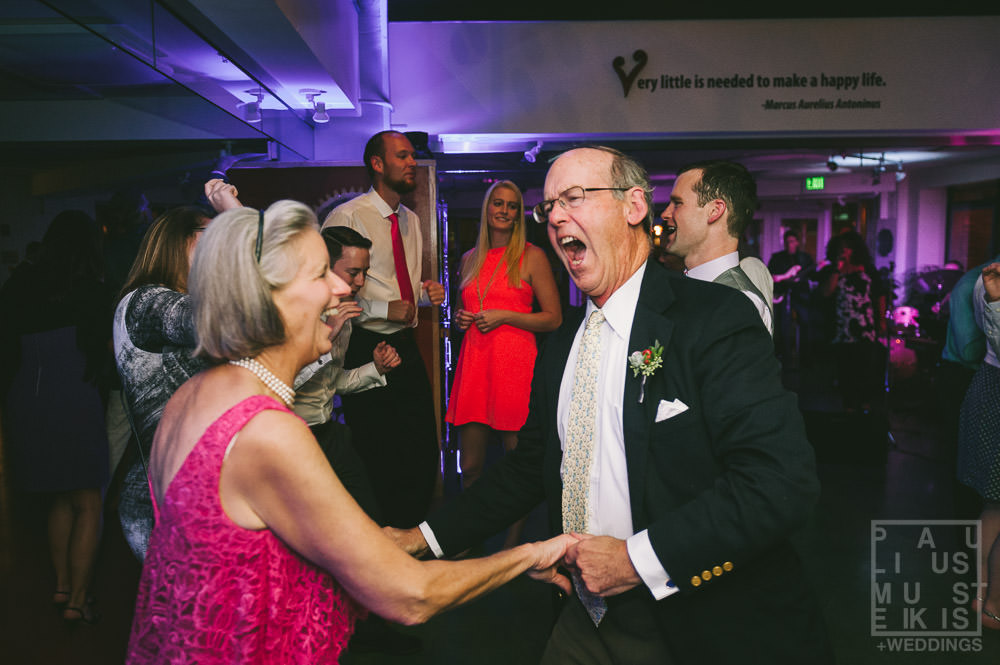 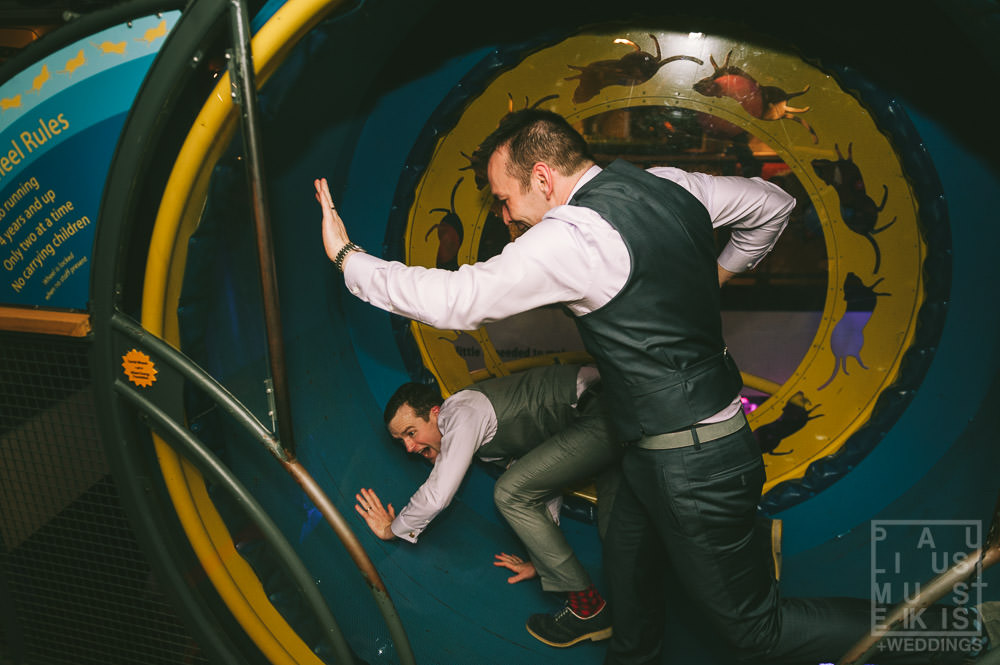 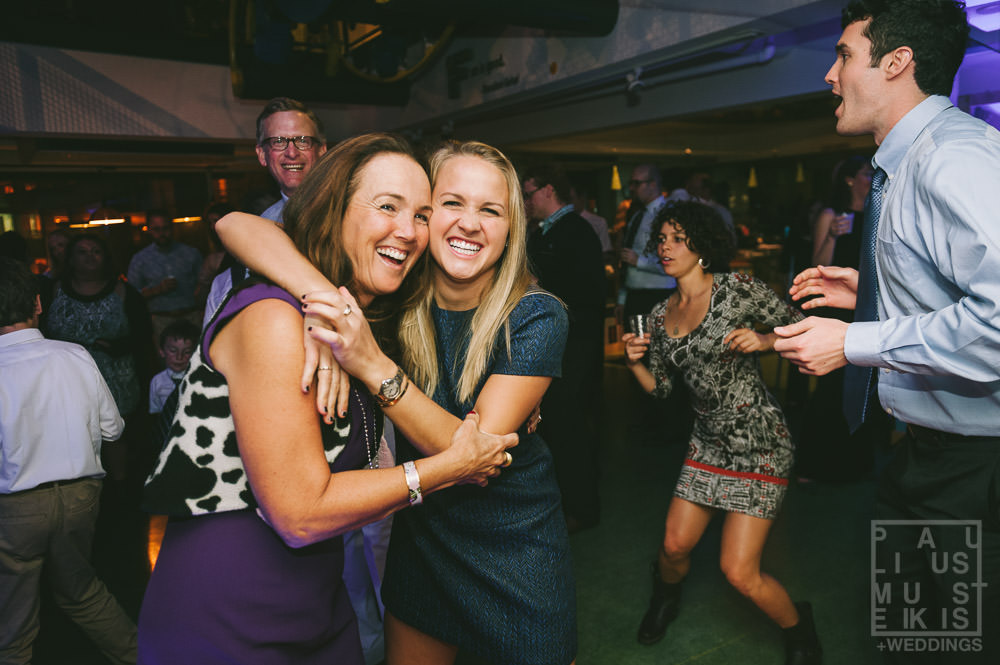 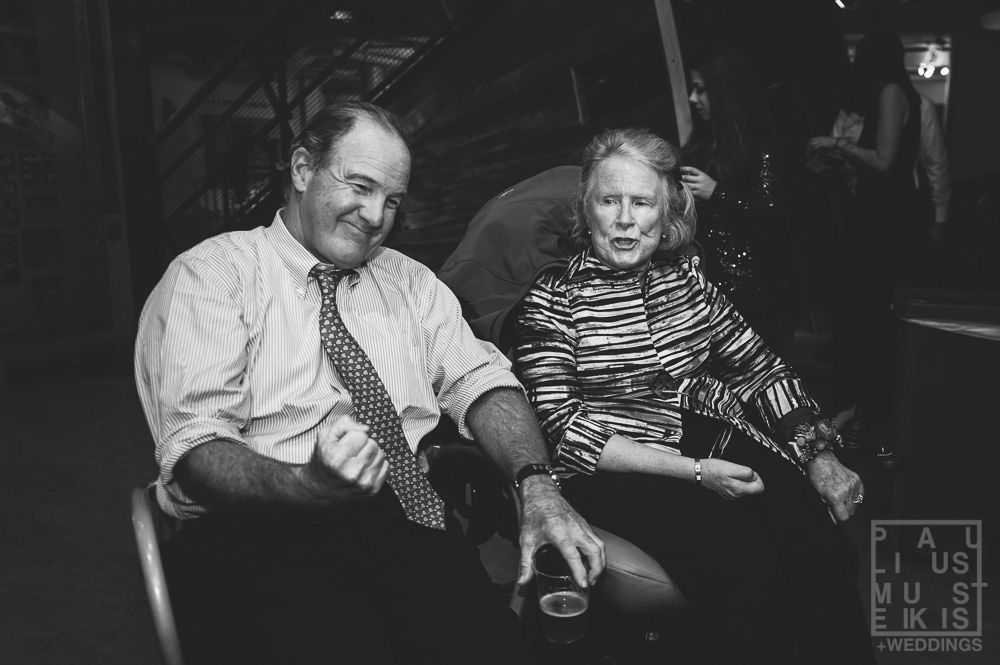 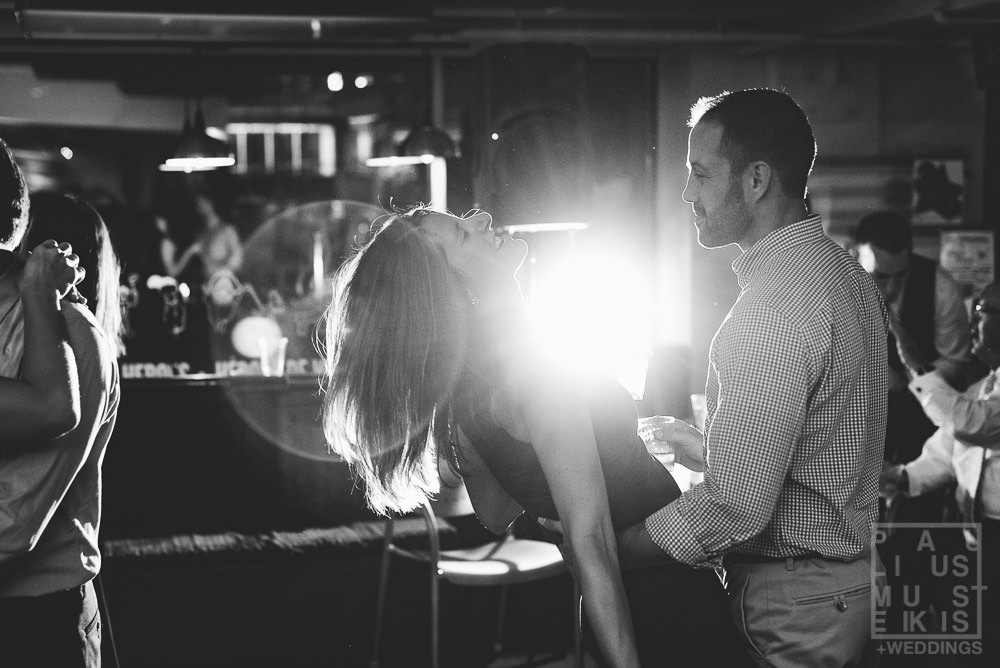 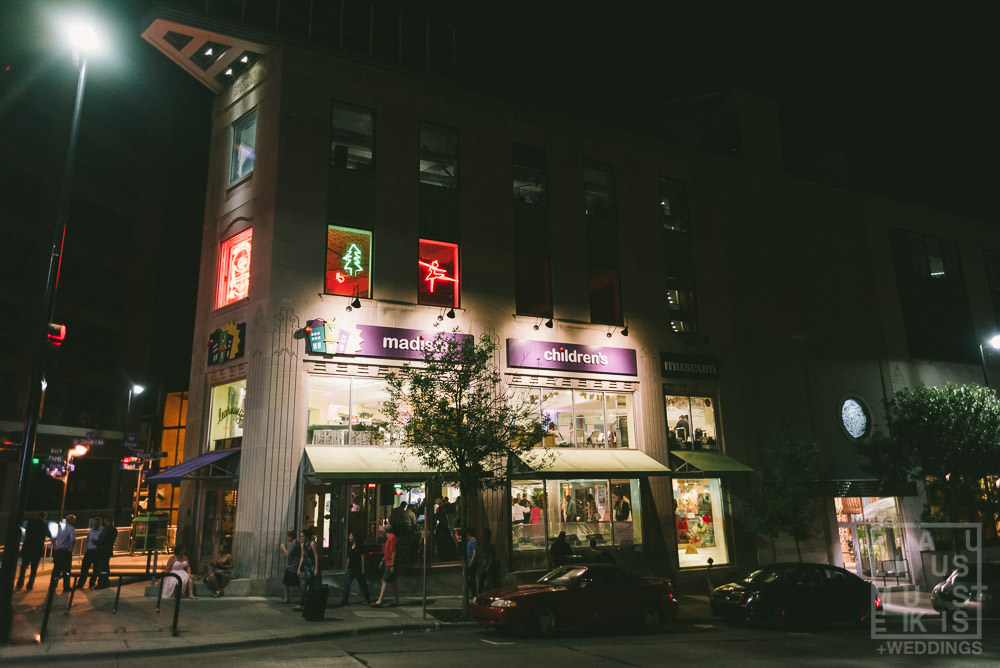 Thanks a bunch for stopping by and reading Tom and Brad’s love story! Are you planning your LGBT wedding? Looking for honest, real and LGBT friendly documentary wedding photographer?  If so, shoot me a message! I would LOVE to be part your tribe!